Curvature in penis is called as Peyronie’s Disease. A slight curve is present in many men’s penis which is normal until sever symptoms such as pain and problem in intercourse appears along side. The most probable cause is repeated injury during sexual intercourse or trauma during some accident. The disease is characterized by the formation of scar tissue and inflammation along the penal shaft that is felt as area of numbness or firm lump by the patient. Firm erection is not achieved by such individuals. This can be both due to lack of blood supply or due to the effects of scar tissue. Most home remedies for Peyronie’s disease are not well-studied, and based on anecdotal evidence. A couple Herbal Treatment for Peyronie’s Disease have been studied and show promise.

The Peyronie’s Disease Symptoms vary but more than half men will initially feel pain during intercourse with firm or lumpy feeling at the site of pain. Symptoms can occur suddenly or can appear in a progressive fashion. During severe changes the penis might be curved up, down or in a side words position which makes the intercourse impossible. If the trauma experienced was severe with the following heeling by scar tissue formation, this condition should be differentiated from peyronie’s disease. This fibrous tissue is not associated with erectile dysfunction or shortening of penis.

The proper Causes of Peyronie’s Disease is not fully understood but it is thought that rupture of small blood vessels inside penis leads to this condition. During healing of these micro injuries scar tissue develop leading to this condition. Inherited genetic material might play a role in this scar tissue buildup as it is observed by the experts at herbs solutions by nature that not all men having this injury will present with this condition. The scar tissue interrupts in proper stretching of tunica albugginea, elastic sheath surrounding corpus cavernosa, leading to angulation while erection.

The Peyronie’s Disease Diagnosis can be done on the bases of medical history and clinical examination. An x-ray to rule out calcification of the scar tissue might be needed. If the surgical treatment is opted then tests to determine sexual function is done to plane the surgery with best possible outcomes. 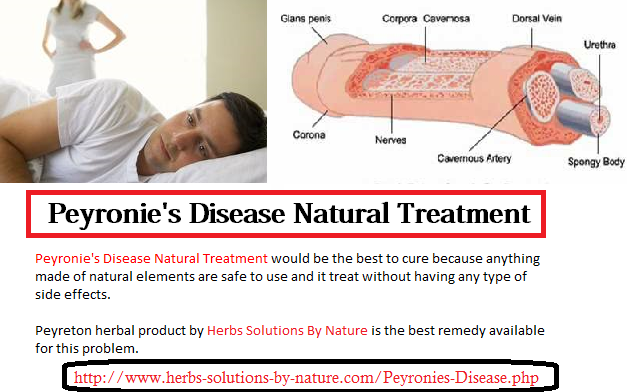 The duration of the disease is hard to determine. It can subside spontaneously or might show improvement over period of 12 to 18 months without treatment. In other cases with severe symptoms Herbal Treatment for Peyronie’s Disease will become necessary. Luckily it is not a premalignant condition and will not lead to any serious condition.

There is no specific prevention of this disease but middle aged men engaging in vigorous, frequent intercourse are likelier to be effected so it should be avoided.

The Peyronie’s Disease Treatment is both medical and surgical. Verapamil, interferon and collagenase are recommended for medical treatment but they have several side effects.

The treatment is very much important otherwise it can become severe which cannot be treated later. Peyronie’s Disease Natural Treatment would be the best to cure because anything made of natural elements are safe to use and it treat without having any type of side effects. There are certain herbs and supplements which really help to treat the disease and manage the Peyronie’s condition. While supplements are shown to be somewhat effective, they are usually used in combination with other methods for the best effect. So Natural Treatment for Peyronie’s Disease must include more than just supplements.