Achalasia is a motor disorder of the esophagus resulting from progressive loss of enteric neurons. It is characterized by aperistalsis and impaired relaxation of the lower esophageal sphincter (LES), which leads to chronic dysphagia, regurgitation and chest pain.1 Even to date, in an era of exponential medical progress and increased insight in disease mechanisms, treatment of patients with achalasia is still rather primitive and confined to mechanical disruption of the LES. 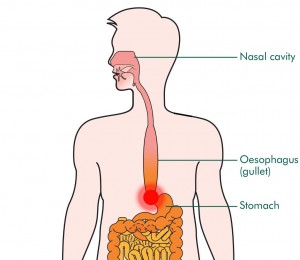 Already in 1674, Sir Thomas Willis successfully dilated the LES in a patient with achalasia using a cork-tipped whalebone. To date, this approach has evolved to pneumatic dilation (PD), a technique that stretches the LES by insufflation of a rigid balloon positioned across the esophagogastric junction. In most centers of expertise, Achalasia Treatment starts with a balloon of 30 mm in diameter followed by a 35 mm balloon, also referred to as graded PD. The alternative conventional treatment of achalasia in 2015 is laparoscopic Heller myotomy (LHM). In brief, during laparoscopy, the circular muscle layer of the LES is carefully cut with extension of the myotomy 1.5 to 3 cm towards the stomach and more proximal into the esophageal body for at least 6 cm above the esophagogastric junction. Moreover, to avoid excessive gastroesophageal reflux, an anti-reflux procedure is routinely added to the procedure. Mainly due to the impressive short-term success rates of LHM (above 90 percent), this technique has been embraced with great enthusiasm and, at least in the U.S., has largely replaced PD.

In the past few years, mainly triggered by retrospective studies evaluating the long-term success rates of PD, it became clear that success rates in achalasia gradually and significantly decline in time. Although more than 90 percent of achalasia patients initially respond to PD, only 40 percent can be classified as successfully treated after more than 15 years of follow-up. Also for LHM, series of longer follow-up are increasingly reported with a similar drop in success rate to 65 to 85 percent after five years.

Natural Remedies for Achalasia Effective Treatment to Do at Home

Natural Remedies for Achalasia Cure Your Infection with Essential Oils

Achalasia – A Disorder Of Esophagus